Written by Pascal Rogé on 24 December 2015. Posted in Press - Reviews

Fronting up this release with Ravel’s ever-popular Bolero might seem a shrewd selling point, but it isn’t what the package as a whole is really about. For all that, Ravel’s own arrangement of his orchestral tour de force works surprisingly well here, thanks to skilful conjuring of keyboard colours by this husband-and-wife piano duo, plus relentlessly steady drumming from the two percussionists, so that the music’s cumulative power truly builds.

The centrepiece in every sense, however, is Bartók’s Sonata for Two Pianos and Percussion. One of the 20th century’s formidable masterworks, it was regarded as ultra-difficult to play, and particularly to co-ordinate between its four performers, at the time of its premiere in 1938 (by Bartók and his wife).

Besides reaching a state-of-the-art standard in both departments, this recording is remarkable in terms of the bigger picture also. Along with all the rhythmic dynamism, the music’s dark grandeur and dramatic sweep come across superbly – something that’s much harder to convey while meeting such technical demands at the same time. The finale’s chirpier, folk-music manner can often sound trite, but here it surges along with a deep-in momentum that convinces strongly.

Matthew Hindson’s Pulse Magnet is an wacky, up-front, fun piece whose outer sections make no attempt to pretend otherwise, which is fair enough; and its longer and slower central movement offers gorgeously chiming sonorities and note-patterns that mesmerise the ear.

Malcolm Hayes is a composer, contributes to BBC Music Magazine, and is currently writing a book on Sibelius. 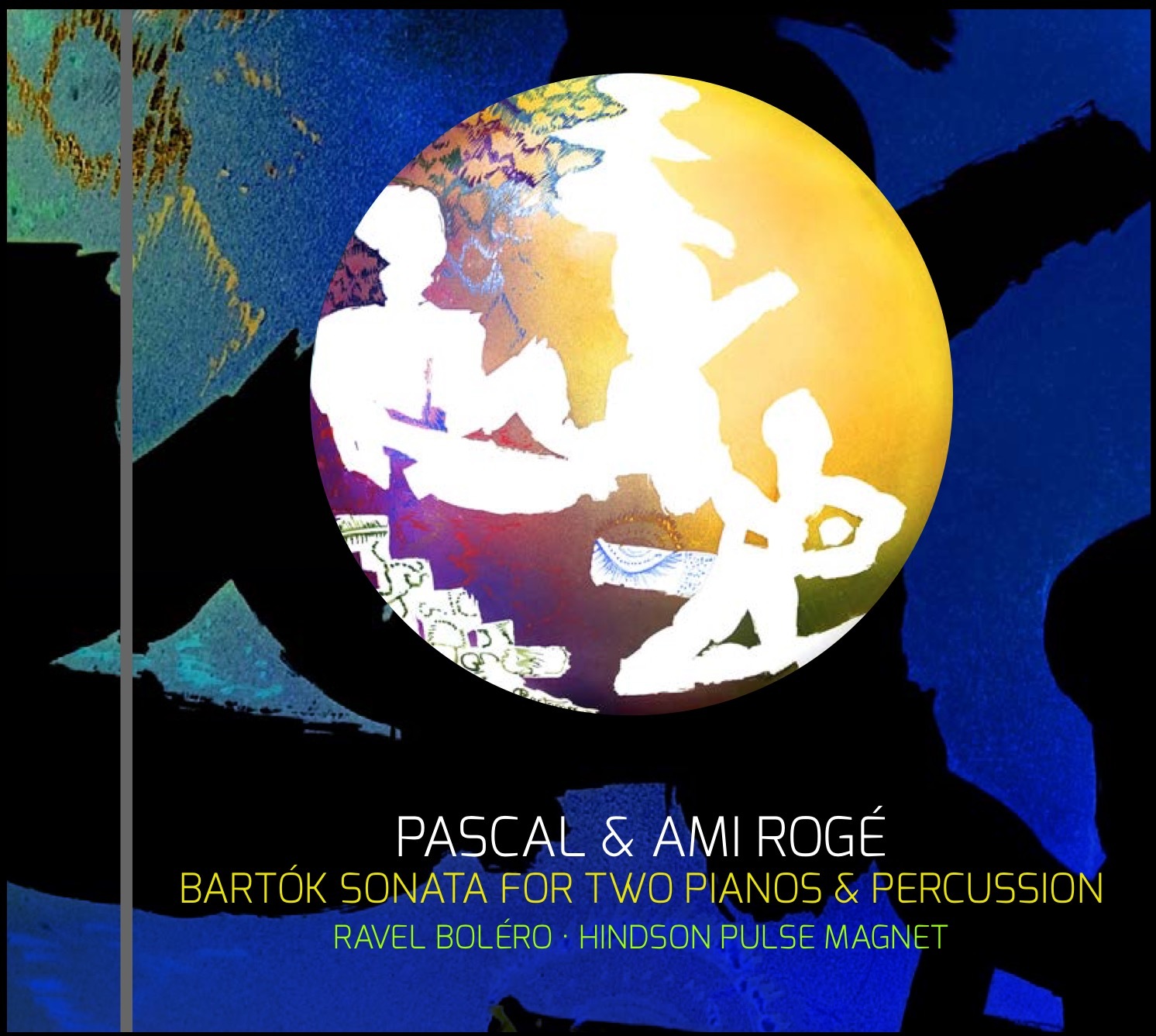 Pascal and Ami Roge at the Barber Institute

Written by Pascal Rogé on 17 January 2016. Posted in Press - Reviews

Pascal and Ami Roge at the Barber Institute

*****
There's something very special about the piano duet as a performing medium; all that proximity, enforced intimacy, subtle telepathy. Many student friendships are forged in this way, as happened to me in this very building half a century ago, and as happened again elsewhere with a new friend only last year.

So it was quite appropriate for Pascal and Ami Roge to take the stage smilingly, almost shyly hand-in-hand, and to remain thus throughout this enchanting evening -- except, of course, when actually playing.

It might have seemed an intrusion to listen in on their communings, but in fact the Roges projected their playing with such a feeling of inclusiveness that we almost felt as though we were guests in their domestic salon.

Faure's lovely Dolly Suite was given with tenderness, wit, and, at times, with a childlike solemn sense of occasion. Schubert's F minor Fantasia had the duo phrasing and breathing almost like a four-handed entity undertaking this trudging winter journey, sometimes gathering pace, sometimes holding back, and with countermelodies freshly minted.

Between these two duet staples Pascal Roge took the piano for himself in a selection of Debussy Preludes, the apparently wispy impressionism tightly controlled by means of pedalling and dynamics, pieces such as La Fille aux Cheveux de Lin emerging clear-cut away from the context of veiled whole-tones, and La Cathedrale Engloutie telling a real story as the sunken edifice arises from the waves and descends again.

Mozart's busy Sonata in C brought totally different demands in terms of texture and figuration from the partners. Its performance sparkled with delights, and Ami Roge revealed a wonderfully rich tenor register.

Until now she had always been seconda, but for the four Dvorak Slavonic Dances she came out briefly on top (they reverted to their usual deployment halfway through). These were joyous, infectious , and again, given with a sense of fresh discovery.

The encore, the Feria finale from Ravel's Rapsodie Espagnole, took us into a totally different sound-world, visceral, swirling with colour, sleazily louche and foot-stampingly exuberant.

Sweet, Sweet Music From The Rogés

My granddaughter was four years old when she first saw a tandem. She was astounded, but also troubled.
“How does the one on the back steer?” she asked.
We sadly revealed that the one at the back has no choice about direction. She declared that she would never ever get on a tandem.
I wonder if it’s a bit like that, being the second seat in a piano duo.
Shortly before husband-and-wife team Pascal and Ami Rogé came on stage, my wife and I were speculating on who would get the big piano stool and who the small one. She believed that Ami would need the big one so she could reach the piano; I felt sure the lead pianist, Pascal, would get it.
I was right. But later on, they swapped seats for the first of Dvorak’s Slavonic Dances (though they swopped back again for the second.)
Ami Rogé made it plain she was happy to be number two, and she pedalled for both of them (the piano, not the tandem). What you get with this couple isn’t just excellent pianism, but an ongoing on-stage love story.
The concert opened with Listen with Mother – well, the Dolly suite by Fauré from which the signature tune comes. Fauré was in the habit of writing a tune to celebrate moments in the life of Hélène Bardac, the daughter of his mistress Emma. Emma was apparently also involved with Debussy, who had a daughter Chou-Chou with her (and she inspired his Children’s Corner). Hélène lived until 1985, but Chou-Chou died in 1919 at the age of 13. The picture is of Hélène at 22 with the eight-year-old Chou-Chou. But I digress, though in a fascinating way, I hope.  It’s a wonderful piece, though very much of its time, with flashes of Parisian music hall. Pascal Rogé sees himself as an ambassador of French music, and this is plainly a calling card.

Next, Pascal Rogé appeared alone to play six of the best-known of Debussy’s Preludes. Debussy interpretation was always what Rogé was known for, and the placing of notes and precise pedalling was superb.
La Cathédrale Engloutie – the drowned cathedral – has a personal resonance. My wife and I once visited a part of France where they had emptied a massive reservoir, and an entire village with church had re-appeared from the water. I remember we ate a goat’s cheese pizza.
Schubert’s four-hand Fantasia, one of his greatest works, closed the first half; it contains another on my list of World’s Greatest Tunes, so I loved it.
The Mozart four-hand sonata got a stylish and poised performance, but the icing on the cake was four wonderful Dvorak Slavonic Dances, 1,5,2 and 8. All the yearning of the Slav soul was there, but they also negotiated the twists and turns of the furiants with such aplomb that the audience broke out into delighted spontaneous applause.
This was a fitting end to this latest series of Harding Trust Piano Recitals at the Forum Theatre, a concert which was truly easy listening – not because of some kind of dumbed-down music, but because of complex music which was truly melodic and played with affection.
It’s been a season which has ranged from seasoned English and American masters – Martin Roscoe and Garrick Ohlsson – to young rising stars like Alexandra Dariescu. I see that next season includes both the 2014 winner of BBC young musician of the year and the man who won the keyboard final in 2004 – Benjamin Grosvenor. Director Mike Lloyd is to be congratulated on getting these people.
As an encore, Pascal and Ami Rogé played the Féria from Ravel’s Rapsodie Espagnole. Ravel’s marking is “assez animé” – pretty animated – and they certainly obeyed his instructions. Pascal Rogé said they loved the music because it was Spanish in nature, and Spain was where he met Ami.
Throughout the evening, the couple only stopped holding hands when they had to put them on the piano. It was very sweet.

IN a self-indulgent sense, Friday lunchtime's tribute concert to the music of Francis Poulenc seemed to me one of the least-appropriately situated concerts I have attended. We should have been in a bar. We should have been drinking red wine and smoking pungent French fags (is one allowed to say that these days)? And in a perfect world we'd be beside the Seine and we'd have lunched, before the show, on a croque monsieur, or, if you like yours with a fried egg on top, the Madame of the species.
In the spirit of the place, the culture, and the unique French-ness of every nuance of Poulenc's utterly-French music, rolled out on Friday by the great Frenchman Pascal Roge in a delicious confection, as an unbroken continuum, we'd have proceeded, from lunch and music, in a thoroughly Gallic manner, to a passionate intellectual debate about what it is that makes French music, not least that of the engaging Francis Poulenc, so inimitably and unmistakably French.
Most of the answers lay in Roge's splendid recital, which richly-characterised and captured the flavours, accents and colours, from sentiment to wit, grace and charm, that were peppered through the selection of Mouvements perpetuels, Novelettes and, not least, the characterful Soirees de Nazelles. But there was more in Roge's playing: did you spot the freedom of form he found within the classical outlines of Ravel's Sonatine? There was something very French in it. And above all, did you notice the complete absence of percussive touch in the first of Satie's Gymnopedies? Is there a different concept of touch in this music? You tell me.

The sound of familiar orchestral music played on two pianos can have a startling effect: hearing the chromatic flute opening of Debussy's Prélude à l'après midi d'un faune characterised only by the piano makes you concentrate on harmony and phrasing, rather than orchestral colour and timbre. It's a stimulating aural exercise, as well as a different kind of pleasure.

The life/music partnership of Pascal and Ami Rogé continues in their exploration of French music with Ravel's Ma mère l'Oye and Rapsodie espagnole. Ravel's transcription of Debussy's Fêtes and the couple's own stunning version of the same composer's La Mer work especially well.